Prev
All Entries
Next 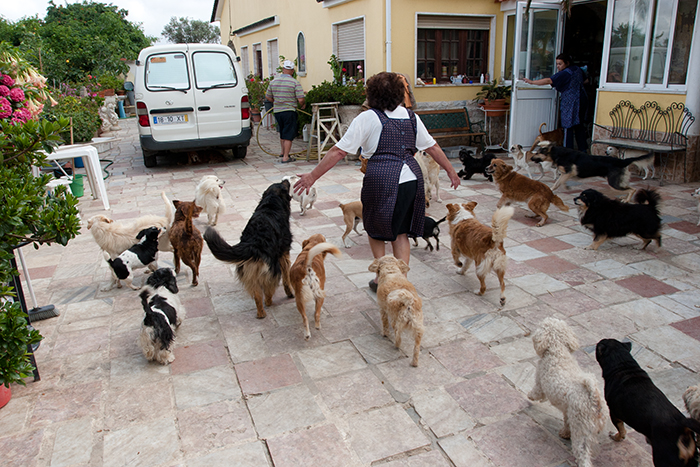 After 2 hours of sleep, a coffee and a pastel de nata I still felt quite unsteady on my legs when I met Catarina around 2:30 am. Luckily photographer José Fernandes who made a reportage about Catarina’s daily routine, was alive and kicking. Catarina was about to leave her house in a village called Sarilhos Pequenos (which means ‘small troubles’…) to the MARL market to buy fresh fish from the fishermen. She would sell her carefully selected fish later that day at the Mercado da Ribeira in downtown Lisbon.

At Catarina’s house we were greeted by no less than 54 talewagging dogs. I learned that after Catarina had started to host one stray dog years ago, people had brought her more abandoned dogs so that today they’re 62…

From Catarina’s home we drove to the huge MARL market in Loures, about 22 km away from her workplace in Lisbon. In 2000 MARL had taken over the position of the Mercado de Ribeira (°1882) as the main market of Lisbon, and since then all restaurants, supermarkets and groceries prefer to do their shopping there. Thus the Ribeira market has lost its appeal. Now the City government has other plans with it. The conversion of the Ribeira is in the hands of the Lisbon-based architecture office Aires Mateus. Will they make of the Ribeira something like the San Miguel Market in Madrid – a luxurious tasting platform with plenty of little restaurants and bars and shops?

And what will happen with Catarina and her collegues, who have been working in Ribeira for a lifetime? For a while we can still enjoy Catarina’s excellent fresh fish, her cheerful character and willingness to share stories. Let’s celebrate Catarina as one of those many every day heroes of Lisbon.